I had indeed sailed to Dominica; in the wee hours of the next morning in a hazy sleep, I heard roosters off on shore. I was so confused. Where the heck was I? What was going on?! Oh yes. I remember, I sailed Acedia to Dominica and was anchored out in St Rupurt Bay, Portsmouth. A bit later after the sun came up, I eagerly got myself together, got into my dinghy, and cruised over to what I thought could be the Customs Pier. However, it wasn’t; I had only gotten as far as the town fishing pier and the very nice lady in uniform pointed out the customs pier wayyy across the bay.   Once I made it to the customs pier, I wondered around saying good morning to a few Dominicans limin’ under a big tree. I walked into the Customs office and the lady who walked in just after me liked my skirt so much she asked if she could have it! Well, I felt bad about not wanting to give her my skirt but I told her I didn’t really want to give it away as I would have to dinghy home in just my underwear!   She laughed. I completed my paperwork and paid 4EC to clear into Dominica. What a deal! The customs agent was kind and answered some questions of mine regarding safety in the anchorage; the main anchorage in the bay was patrolled with security to make sure the yachts were looked after from any potential threats. I felt a bit better after all, I knew nobody yet on or around this island. I was a single female on a boat and this was my first stop exploring an island I only had vague memories about. And all I really knew- I was excited to be there.

I went on from the Customs Pier back to the main town pier (or the fishing pier) to have a wonder around the streets. The town really only seemed just vaguely familiar as I walked down the main, yet, modest strip when I ran into Nikon who was selling some vegetables and provisions on the street. He was selling the biggest root vegetable I had ever seen! So, I asked what the heck it was. I can’t recall the name, but the medicinal purpose was to help heal wounds, especially after a surgery. Well, there was no need to heal any surgical wounds for me so I passed on trying it. Nikon was very friendly and wanted to be friends. I wanted to wonder and explore so I wished him a good day and hoped to see him around as I was planning to be in town for a while. As I walked down the street some old Dominican man came up and kissed me. Well, my first day and first taste as to how these Dominicans sure are friendly! Geeeze.

I continued down the street to the corner store by the bus station where I asked where I could find wifi and ended up trying all her homemade flavored rums…all before noon! The passionfruit being my favorite, of course. Turns out the very nice lady’s daughter lives in Boston and we were talking about the weather there. It didn’t matter what the weather anywhere at this point, Dominica was where I wanted to be…I had sailed there. And I was getting a rum tasting before noon. Oye.I went back to my boat and went ashore to Sandy’s beach bar and found French bread rolls with passionfruit jam, passionfruit juice, and wifi. I researched and reached out to all the WWOOF farms on the island, which the intention of spending some time on the island working on an organic farm. I was very excited about this prospect! 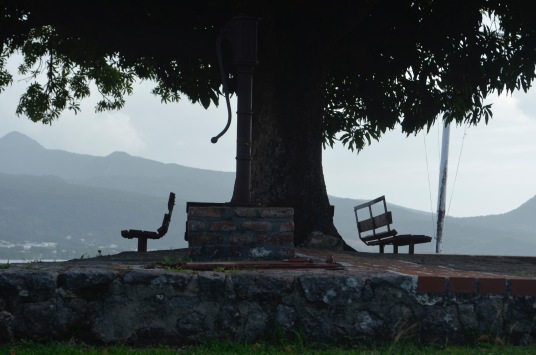 I went back to my boat to start trying to come up with some dishes from my farmer’s market grub I picked up a few days earlier in Antigua. My friends were supposed to be in later that day! Soon enough while I was smashing up garlic or something like that, I hear familiar voices yelling out to Acedia! Gaia had arrived!! Finding familiar friends on Caribbean islands was so flippin’ cool.

Mike and Kirsten eventually came over for a Melissa created Wanna Be Caribbean dinner the next night and I reminded them how to make painkillers as they brought the fixings for yummy drinks!   We talked about planning hikes and the best means to get around to do all the cool things to do and see on the natural beauteous island of lush Dominica. Figuring out what to do, what order to do it, and the best means to get around was the most difficult part of adventure on the island. There were options to take a bus some places but then there were taxis, renting a car, or just hiring tour guides. We agreed to start out with a local hike at Cabrits National Park a short walk from the dinghy dock, which always makes for a good place to start exploring. 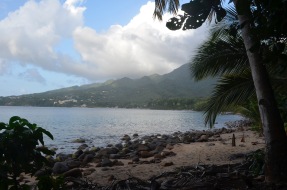