It’s so timely that I get back to my blog from sailing a little over a year ago. I finally got word from my friend in Dominica that he and all those close to him are ok after the storm Maria caused severe categoric hurricane havoc over one of my favorite islands I have visited in the Caribbean.  It took some time, but my friend ‘Eduardo’ was finally able to reply to my inquiries of him being on island and how well did he storm? He announced he was safe but that his roof was gone, his parents were ok, and there was soooo much damage “omg..but we ok…we got good life.”  And that’s the amazing island attitude-when you know you are rich just living simply in one of the most naturally beautiful places in the world.

It’s hard to comprehend the level of damage Dominica has now sustained- considering today they have suffered more severe than a categorical tropical storm attack. I saw the remnants of just Tropical Storm category rains a few years back were still visible all over the island more than a year ago now. Efforts were still in place to rebuild broken infrastructure.

It was January of last year when I was walking down the street for the Opening of Carnival in Portsmouth when I met Cornelius whom I dubbed ‘Eduardo’ for some reason. It seemed to me that he needed a more fitting and suave designation to go by…and a name I could remember. I have become so bad with remembering names! Eduardo stopped me to ask if I needed condoms for the evening. WHAT!? Somewhat shocked and oddly impressed by the attempt at promoting responsibility all at the same time- we quickly changed the subject, as we clearly just wanted to chat with each other. He was curious about me as the subject changed from something that made my prudishness blush to chemistry. Yep, science class chemistry- pH, acids, and litmus paper. Eduardo was nerding out with me the chemist on the main street of Portsmouth, Dominica pre-Carnival event. Do stranger things happen in life? I had some bush rum and we decided to move on down the street together. I instantly had a friend- a big, tall, friendly, genuine, smart, very respectable Dominican friend. I was so grateful to have a new friend as I was entering my first Carnival experience and I wasn’t exactly sure what to expect nor did I know where my friends were yet in the crowd!

And a crowd it was, as it seemed most of Dominica had congregated along the main street in Portsmouth. We walked away from town over the bridge of Indian River to get behind the truck and band float that started the movement. I was so impressed with the environmental messages around the river advocating for going plastic and Styrofoam free. 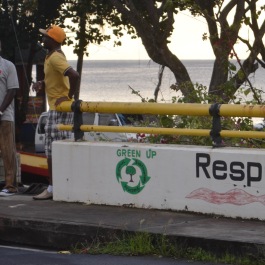 St Rupert’s Bay, I had noticed is polluted with plastic around the piers. The marine debris floats, it’s embedded in the sandy bottom, it’s tangled up in fishing nets and lines to tie boats off to. I would have had quite the job to do if I wanted to snorkel and collect all the marine debris littering the bay. Trust me, I thought about it!

But, what I thought about more was how do we stop the use of disposable, single use, styrofoam and plastic ‘to gos’ everywhere? Personally, I make every effort to avoid buying anything that is provided in styrofoam and for the most part, single use plastics. So, for street food I stick to treats wrapped in paper, like a roti! And eat ice cream out of a biodegradable, edible cone. Many times I am found with a reusable coffee mug and/or water bottle, and encourage establishments to fill those with whatever I am desiring at their establishment. Reusable mugs also second as ice cream ‘to gos’ very well as they tend to keep the ice cream contained and insulated from the Caribbean heat! I obnoxiously refuse plastic bags to the point I very clumsily end up with arms full of random this and that. I often think it’s so darn hard to be green sometimes as I drop that random orange I tried to buy and stand there watching it roll away on the ground, ugh, hands full of other things that look desirable. 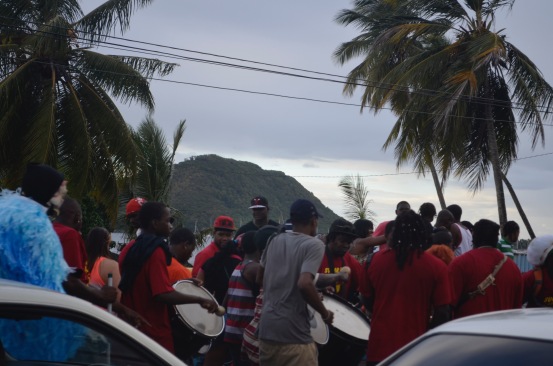 The pre carnival festivities consisted of a crowd of people dancing in the street following a truck with a band and speakers of Carnival music. It was an evening of dancing, seeing a few intermittent people in traditional carnival costumes and meeting Eduardo’s friends, running into my friends, and wondering the streets stopping to watch the moco jumbies amazingly dancing on stilts in some very colorful elaborate costumes and grabbing pastelitos (mini meat pastries or pasties) for snacks and rum drinks until the crowd dissipated for the evening. I eventually was hungry, tired, and my foot hurt, so Eduardo made sure I made it to my dinghy safely where I was able to return to Acedia for the night.

My foot was still swollen to the point of not being able to recognize where the ankle bones protrude above my foot. It always felt better to ultimately be moving around rather than leaving it still and resting, however an evening of dancing and being on it was quite a bit for my little leg.

A few days earlier, Mike, Kirsten, and a few fellow cruiser friends, Nills, Lisa, Megs, Tom and I had gone on an adventure up a nearby mountain to Syndicate Falls for a hike. It was beautiful land full of lushness and an abundance of tropical fruits, vegetables, trees, wildlife, and vast biodiversity! The cocoa shells, pineapple fields, grapefruit trees, coffee beans, coconuts, papaya, oh my!

We hiked down to the river, which we followed to the waterfall. The waterfall was refreshing however; the pool was only knee deep at best. Thankfully we were not tempted to go in for a swim because the water was actually a reservoir that provided drinking water to the towns below.

We enjoyed seeing the waterfall and hiked back out. To spice up the jungle experience, on the way back we grabbed vines to Tarzan swing across the river. I was Jane!!!

Weeeeeee…..ouch. So ‘fun and games-like’ until I jammed my foot into a rock. I immediately kept walking as I could feel the blood rush to make it swell into some unrecognizable pain. I was convinced I could walk it off, so I bit my lip and hobbled all the way up to the road as we explored the trails, and fields of vegetation, picked fruit off random grapefruit trees, investigated the modest buildings which looked like trees houses and club houses you dreamed of as kids!  It was obvious there was pride in the land and a lot of hard work put in by the tropical farmers in the area.  It was simply beautiful. 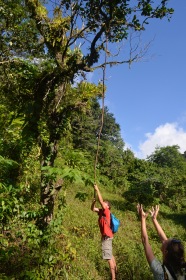 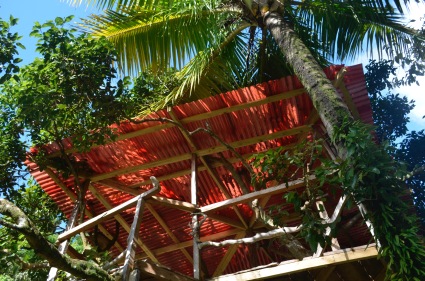 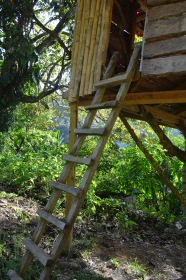 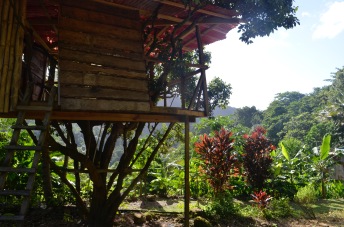 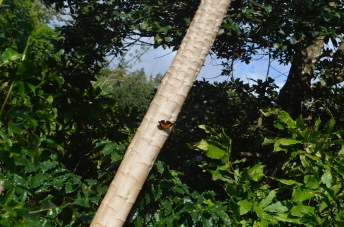 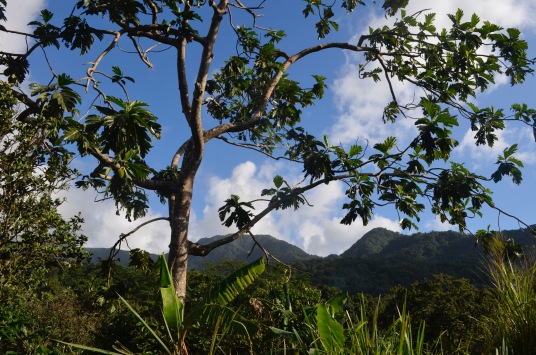 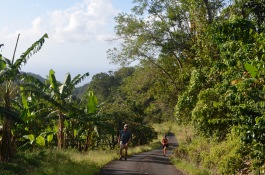 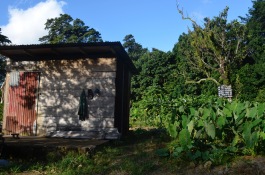 I was biting my lip the whole way because ouch, my ankle was messed up and I know I didn’t really want to stop and doddle anywhere but I didn’t want to be party pooper, complain, or bring too much attention to injury, I just wanted it to go away. I was in Dominica, I couldn’t be injured!

On the way up the road to the entrance of the rainforest and parrot reserve, which if I remember correctly was only supposed to be 15-20 min walk up from the trailhead of Syndicate Falls was not only seemingly taking longer, it definitely was longer than promised. I still enjoyed seeing the farming, growing of food, and then the thickening of the jungle again. Hobbling along, I was super psyched to see the van of Allen, who had drove us up the mountain, gave us hiking instructions, and promised to find us at the reserve center a few hours later. I immediately jumped into the van, put my foot up, and also immediately regretted stopping as the throbs set in. oye. All I remember of the reserve center, which was still quite a ways up the road, was the start of a trail into the forest and the ceiling of the center. I stayed put lying on the bench to put my foot up in the air while I watched my friends go off and got a little wander about. Allen and I waited patiently. All I could think about was ICE and how badly I might have injured that foot…. Playing Tarzan in the jungle! 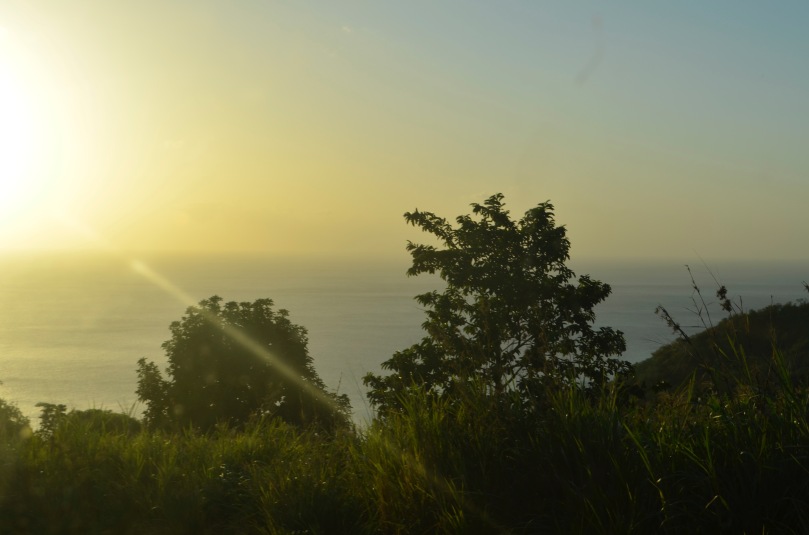 Very timely indeed to be writing about the amazingness of this island as it is said the best way to help out these places devastated by natural disaster is to visit. Bring in your dollars to help rebuild and contribute to the local economy, which is so desperately needed. Thinking back I simply remember being in constant amazement that I had made it to Dominica and was exploring the world on my boat, my home for almost 11 years at that point. I was the luckiest sailor girl in the world. I had friends and support around me almost at all times. Dominica, admittedly, was a tough environment for a single girl on a boat but I was able to navigate that safely. The local men were forward in their curiosity and interest. I very quickly knew who to talk to, where I was looked out for, and to always have a bodyguard-like friend at my side after the sun started going down for the evening. The anchorage was patrolled, but the men eagerly sitting on the beach playing dominos where I came ashore daily was a constant. These men would always strike up conversation about what they could do for my ankle I hobbled on, what herbs or vegetation to wrap my foot with, recommendations where I should visit on the island and offers to take me there, and then ultimately wanting me to accompany them for a drink, etc. Sandy at Sandy’s Bar was observant and told many of them to bugger off and leave me alone on more than one occasion. Eduardo would meet me and I would no longer be bothered. Ultimately, there were always such good people to visit and spend time with.

In the past few weeks, I have been making inquiries about how the island is doing and I have some information from Eduardo. There are boats and flights into the island. You can choose to stay in a hotel with power (generator) or without; there are very few vegetables available for food, but plenty of tomatoes, provisions (root/starch vegetables) and plantains- YUM!! I would recommend sailing up with your own vessel that is well provisioned to share or going for a camping adventure. Dominica has an amazing hiking trail system, the Waitukubuli National Trail. These trails are the only long distance trails in the Caribbean and allow you to trek across the entire island.  Rumor has it can take up to a week to get to/from the north-south ends (I only trekked the last few miles and a few random miles in the middle of it).

Meanwhile, Eduardo has requested donations to help his island and is looking into reputable organizations to make generous donations to.  I will post when he gets back to me, hopefully in my next blog post, I have a lot to share of Dominica- stay tuned!

Meanwhile, Antigua Yacht Club (my new home yacht club) is collecting donations and have been making relief runs to the island. For more information on their efforts or to make a donation, see Antigua Yacht Club’s Dominican Relief Efforts.