The next morning was so exciting! I was awake before 5:30am and had the anchor up and sail ties off before 6am. I got out of the harbor as the sun rose behind the mountain, I put the sail up and I was off sailing toward Guadeloupe!-in my pajamas which is my favorite 🙂 It was a gorgeous day with about 15+kts of wind off my port beam with a little swell that was just incredible to experience. I was so happy to be out sailing. And I was able to do nothing but enjoy it. It was just so great to have not one distraction from the bliss! 🙂 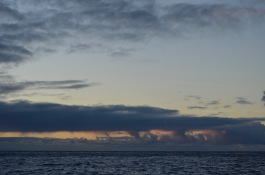 The sail to Guadeloupe was fast even with my reefed main. Since I was not able to get the rivets I needed to re-revit my sail track to my mast it was quite important to keep the main from being too much load.

I especially liked being able to sail along with a reefed main because it significantly decreases the amount of work needed to winch the main up and get sailing.  Sometime hydration and nap are necessary for hoisting that monster mainsail of mine! 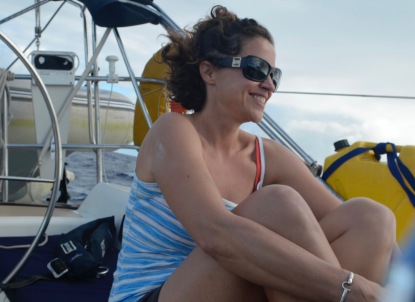 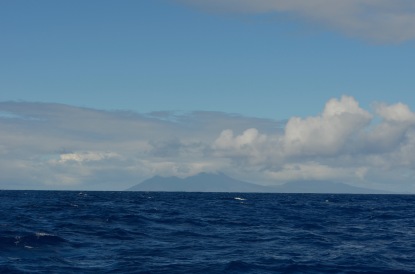 I headed off the west side of the island of Guadeloupe as I was clearly going to get some lee effect of the mountains. I actually wondered if anyone knew how far out of these windward islands you need to go to be clear of these dead wind zones? I looked out as far as I could

see to try and find some visual indication that there was wind somewhere out there to the west but alas, I had become becalmed and there was no wind in sight. What to do? Jump in for a swim, of course! The water was so incredibly inviting. I had the hot afternoon sun blaring down on me and we were going nowhere. Time to drop the dinghy, throw out my trusty swim rope and enjoy. I am one of the only sailors I know that sees sailing as a means to get to beautiful waters and swim in them. And I do get to beautiful waters and I swim in them.

I continued on after I fired up the engine for a few hours. I had anticipated stopping by Pigeon Island to overnight however, with the time that I had made it didn’t make sense to stop quite so early in the afternoon. I kept going until I found a cozy cove just before the sun threatened to set and dropped anchor. I was exhausted. But the sunset was one that was not ever to be forgotten. I ate something quick and went right to sleep after it was solidly dark. I had to get up and do it all again the next morning to make it to Dominica! 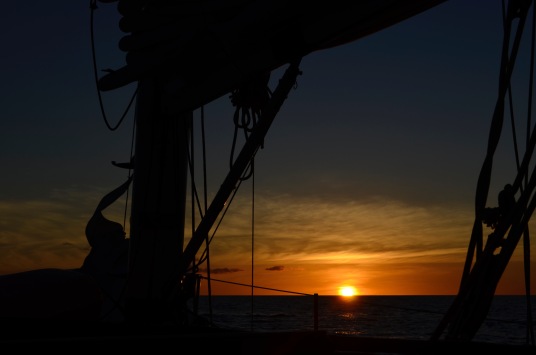 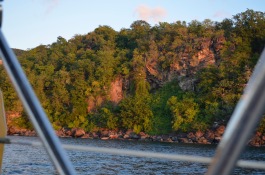 Wow….I had gotten to the Caribbean and I was sailing my boat to Dominica. 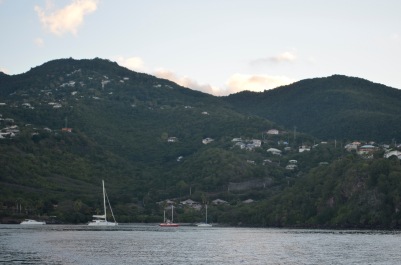 The next morning before 5:30 I was awake and picking up my anchor off the Carribean Sea floor that held Acedia and me securely for the night. I was off in the calm of the lee of mountainous Guadeloupe. I motored for a few hours until the wind and seas picked up and sailing was an option again. I mistakenly left the dinghy in tow and as the seas got bigger 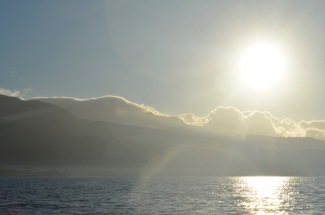 around the southern edge of the island where the wind and water whirled around La Grande Soufrière quite strongly, it was too late and I was not able to safely pull the dinghy in close enough and clip it into the davits. I wasn’t a fan of towing the little tagalong inflatable at this point, but I had little choice. So, I kept an eye on the motor and watching to be sure it was staying securely mounted to the stern with no movement that would indicate it being ready to pop off and into the sea (apparently this sort of thing happens! Um, and yes, it *may* in fact might have happened to me) 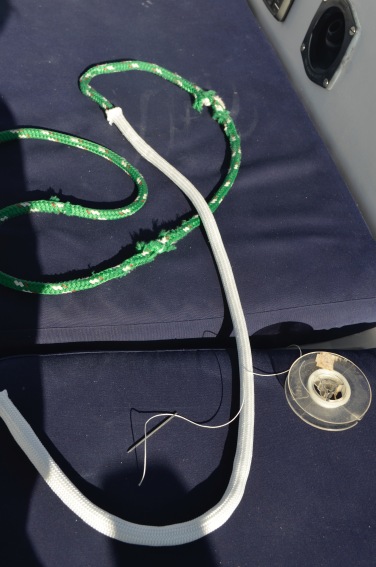 A little project I was working on: sheathing my chaffed reef line

As I passed by Les Isles Des Saintes I realized I was going to be more close hauled than I anticipated on my approach to Dominica. It was still early in the day and I thought a tack by Les Saintes would be more interesting (I had heard good things of the islands and was looking forward to exploring them on the way back up north) than a lost opportunity to tack in the lee of Dominica. I took the tack and ended up skimming close by the cliffs of Terre De Bas. The rest of the sail to Dominica was exhilarating as being close hauled made me a bit nervous as the wind really gusted heeling Acedia over. I normally would think this would be quite fun but I was focused on keeping an eye on my sailtrack knowing I was a very short but questionable (with that strain on the sail track) few hours away from Prince Rupert Bay. 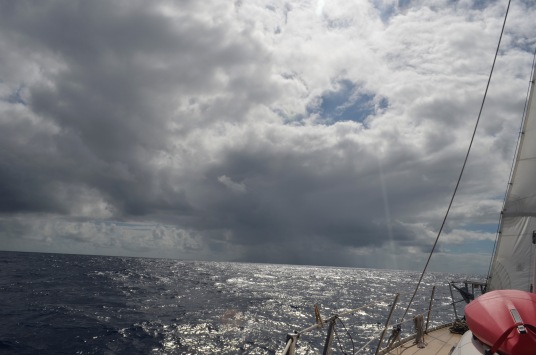 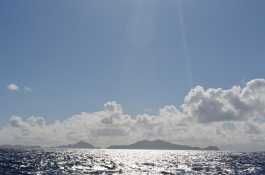 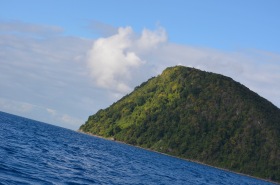 that just stayed put.  It surely was dumping a loaded amount of rain down on the mountainous landscape late that morning. As I approached and passed by the northern tip of Dominica, it was quite incredible. The raincloud dissipated and rainbows started appearing everywhere over the land and sea! I had visited Dominica 9 or so years earlier and was excited to be able to come back on my own boat to really explore the diverse beauty of the island. And here I was being welcomed to this glorious place on earth with a rainbow show ♥♥♥ 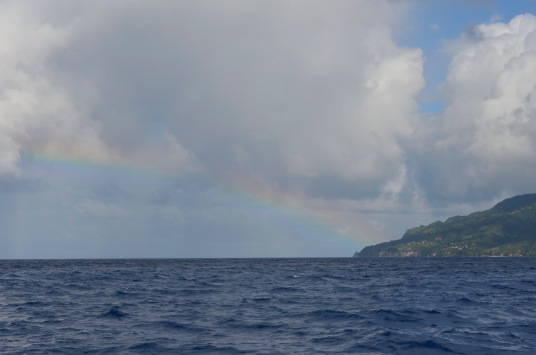 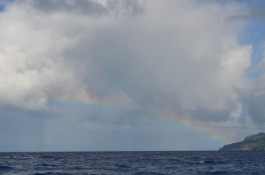 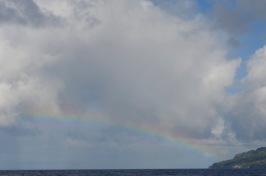 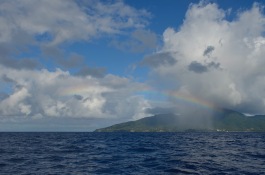 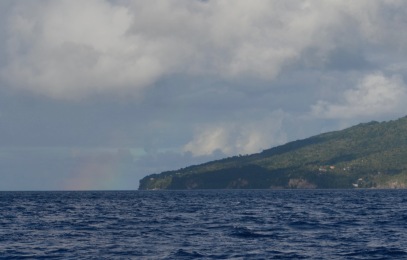 Once I was well into the lee of the island, I sufficiently lost wind to continue making great 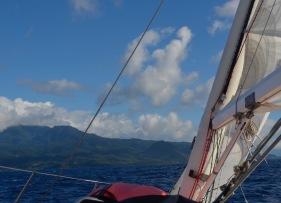 headway, I continued to sail through the light winds as that is what I do; until that is that I decided drop the sails and motored to the anchorage.  The time was due as a great enough effort was made attempting to sail with flogging sailcloth by this time.  As I got into the anchorage and found a shallow place for my anchor to sit, I had a welcome rainbow off to my starboard and plenty of time to catch the sun falling from the sky to the horizon off on my port. I had done it. I had sailed to Dominica. And I was so very happy.

That evening while sitting out enjoying the sunset, Michael came by on his paddleboard. He welcomed me to his country and asked if I wanted to buy a Dominican courtesy flag. I asked how much and for 20 EC I couldn’t pass up the opportunity! That was one thing Mike in Antigua gave me a wicked hard time about; I had been an entirely unflagged boat! Apparently to a yachty, that is pretty offensive. However, for 90 EC for an Antiguan courtesy flag, I couldn’t care less. I don’t have shrouds to hang the expensive superfluous decoration anyway! In Antigua, I had bigger things to worry about than flags. Since I was planning to set up camp in the anchorage for an extended time, the flag was delivered upon arrival, and it was completely affordable; I thought I’d make Mike proud. 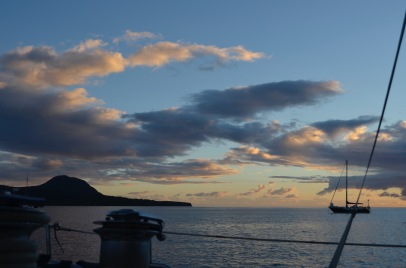