It was just before Christmas when Gaia and I were trying to determine an appropriate weather window for saying farewell to Bermuda and heading down to the Caribbean. We had decided that Antigua should be the ultimate destination as it was the most eastern island that proved to be one of the easiest for crew to fly out of. East was important as once you get east in the Caribbean, it makes getting anywhere north or south or west much easier to get to via sail.

The game of weather window and crew availability continued to be grueling; it’s the toughest game and was a bit tougher for this trip (because with risk, crew had to get to Bermuda and either accept not leaving or accept the ultimate weather forecast for the journey) and it all proved to be not such a winner on this trip.  It was tough all around except I seemingly had flexible and excited crew.

Shelby is a friend from my Boston based marina, a friend of many sailor friends of mine in the marina so she is familiar and comfortable on and around boats. Joe has acted as Acedia’s main electrician who worked on many of her systems getting Acedia ready for the journey. I owe a lot of being able to do this trip to Joe. Both crew were looking for sailing experience and adventure. I, of course, was looking forward to all of it including Christmas at sea! After all, I was planning to (and actually did) prepare Christmas pierogis (this is one of my favorite Polish Family traditions and this year made with Bermudian local organic potatoes from Wadson’s Farm) and cookies for the festivities.   Gaia and I talked about trying to stay close by during the passage and do a sail-by on Christmas for caroling…knowing very well we would likely be a nautical mile or 20 too far to be in sight or to be within shouting distance.

It seemingly was all coming together with a decent weather window with winds in a favorable direction and not too strong nor too light (the forecast was for 15-25kts more or less out of the east with waves 6-10′) and my flexible, eager crew found their way to Bermuda for a Christmas Cruise.

After having the most amazing time here in Bermuda meeting my best boat neighbor/friends (s/v Gaia) on the Rock, meeting so many great and wonderful new friends, crashing a Moth Regatta, exploring a pretty cool organic farm and some beaches, it’s about time to head on down south to the Caribbean per the original plan.

Acedia is setting sail once again for another exciting but longer ocean passage from Bermuda to Antigua!  I have two great friends onboard to help crew, Shelby and Joe.  The passage should take about 6 days and we are excited to do Christmas at sea!  I have Christmas pierogis and cookies for the holiday, as we couldn’t go without a bit of festivities and tradition!  We will see if we can stay along side Gaia and do a little Christmas celebration.  However, it will be a race, so I expect them to be a bit behind (hahaha ;), maybe for Christmas, we’ll let them catch up!?

Jon will be again doing shore support and daily updates, as he is the Guy!  It is so very great of him to help support our routing over the holiday from Hawaii!  He will be calling in everyday and sending updates as to how we are doing.  However, I do want to warn you that Sat phone communications are less than perfect <<!!!>.  We lost touch completely on the trip to Bermuda both on SPOT and IRIDIUM.  There was a very LARGE sat COM outage that day.  If Jon doesn’t hear from us and vice versus, please don’t be concerned.  (Sarah, if you get a call from search and rescue or USCG, that’s a different story!) Please give a day or two for sat phone communications to be up and running before suggesting that Jon send the Navy for us 🙂

Thank you all for following and the support.  I couldn’t be having a better time and I advise everyone to get out and do what you love!!  Have an adventure, be alive!  Merry Christmas and we’ll see you in Antigua!!!

Shelby and Joe arrived the day before departure and helped with last minute provisioning and preparations for the offshore trip. I had attempted to fix my forward hatch on several

occasions but I couldn’t seem to get the epoxy to cure correctly. Joe took over the hatch project while Shelby and I frantically cooked up some meals and took care of other final items necessary for departure. In the morning we got up before sunrise but it was noted that a few rivets were missing and others were loose up the sail track. This is something that I had missed entirely. I had even fixed my top sail car strap while in Hamilton so how I missed the missing rivets on the sail track is surprising. Turns out there were 18 rivets missing and I had 19 extra rivets in my bin of spares.

As we went to hoist Joe up the mast we noticed a severe chafe in the brand new halyard. Once we changed out the halyard with a brand new line in my heaping pile of extra line, Joe went up and put the last of my rivets into the mast to secure the sail track. We were ready to be off as Gaia was ready and had been eager to leave as early as possible that morning. We put up the sails and waved on Gaia as we headed out of the harbor. I sent Jon a text letting him know we had left late as we had some issues to take care of.

Unfortunately, I haven’t been able to get through via sat phone but did receive a text message from Melissa that they’d departed and the Spot tracker appears to be working well. They’re heading fairly east out of the gate with the wind out of the north so that when it clocks to the east, they’ll be in a good position to make Antigua in the prevailing Easterlies they’ll have for most of the trip. The forecast is for 15-20 knots of breeze and building to 20-25 as it moves to the East so they’re in for a quick passage.

Gaia’s tracker is set to automatically post position updates every 10 minutes while Acedia’s tracker is more periodic so Gaia’s link will give more up-to-date information. They are likely to be in close proximity for the first day or so but the performance differences between the two boats will eventually separate them. 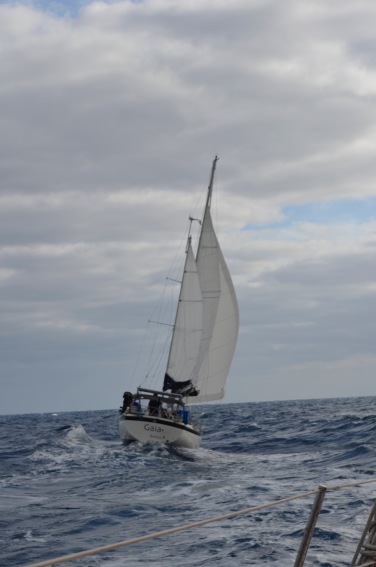 It was beautiful wind outside the harbor, it was a beautiful day and Gaia had immediately overpassed us. Since it was so nice and knowing there was risk of higher winds in the forecast later in the trip, I decided to try to rig the genniker as it would likely be the only time to try one of my new sails. After a few attempts and what seemed like an hour, I got it set right and we were flying again. Had it not taken so long (I had not done it myself and it had been a few weeks since the Bermuda trip with Lance), I’m pretty sure we would have overtaken Gaia within a few hours. It was sometime during this time that Joe had claimed that this long of a passage was too long for his first offshore experience. Something told me that this statement was going to make this journey seem even longer. Good thing I had the genniker up!

was just moving us along so nicely. It was about 0100 or so and wind picked up a bit and the genny sheet snapped. I had it rigged up with the wrong line and it didn’t hold with the slight increase in wind. It was about 30 min before Joe had to take watch so I just sat still in the cockpit letting the sail flog as I felt it wasn’t critical to immediately grab it as the it was mostly just causing extra wear on the sail. I wanted to let Joe take his time coming up to help in the situation as I was aware he was awake and heard it flogging.

Once up on deck, I explained to Joe that I would go forward and change out the sail as Joe stayed at the helm and held the boat into the wind. Joe immediately stated that he didn’t want me going forward and that he was going to. This didn’t make any sense to me and I was very confused as to why there was contest. I was the one who rigged the sail so I best knew how to unrig it; I am very comfortable and the most familiar with my foredeck; and I was the Captain going over roles to be taken to conduct what needed to be done. After going back and forth, I simply stated again who and how the sail change was going to be conducted. We turned on the engine, I clipped onto the starboard jack line, I crawled forward, undid each hank and the shackle at foot of the sail, grabbed the sail, and crawled back with it crumbled up. It was easy, went smoothly, and the jib was hoisted back up to keep us sailing efficiently again.

Acedia’s Spot tracker appears to be down but they were able to send their position via text message this morning (30° 41.733’ N, 62° 52.881’ W) and after running the routing/weather analysis for the day, we spoke via sat phone.

All is well on board. The sea state is lumpy and confused from the front that passed over Bermuda prior to their departure but within a day or so, I would anticipate the swell from the east to dominate the wave pattern. Wind speed on board was reported at 18-22 knots and they are triple reefed. They are sacrificing a little boat speed to get further east, currently doing 5-7 knots SOG and 160-170° COG.

They were a little late departing Bermuda, as they needed to wrap up some boat maintenance issues. They found some chafe on the halyard so swapped it out and found some rivets on the main sail track that had popped so replaced those. Shelby was a little seasick the first day but is feeling much better now; her only concern was whether the Patriots had won.

Gaia’s tracker appears to be working well so that’s a good proxy for Acedia’s position. Acedia is currently a little further south than Gaia but Gaia h
as made better progress east. Gaia is presently bearing 059° from Acedia at a distance of 2.94nm (so still within VHF range). Acedia reports there were some “smug smiles as we passed Gaia last night under a canvas of darkness.” The race is on! 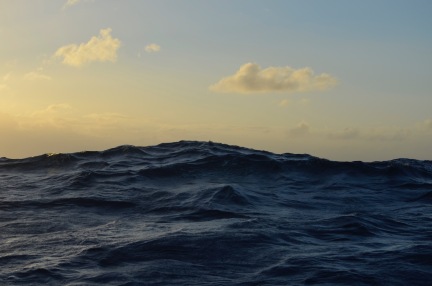