That evening as I was trying to catch up with some business online at the Whitehorse Tavern, when I looked up and across the water saw a very familiar boat attempting to dock at customs. It took a minute to register but Gaia had finally arrived to Bermuda!! Gaia is the boat of my friends who originally co-conspired sailing away this fall. Mike and Kirsten had left Boston at the end of September to sail down the coast to North Carolina before doing the jump over to Bermuda. Our plan was to meet in Bermuda and sail down to the Caribbean together. My interest in sailing down the coast and the ICW was nonexistent nor did I have the time to leave earlier than November, so the direct route from New England to Bermuda it was for me.

I didn’t know exactly when they were going to arrive, but I was moreorless expecting them sometime this evening. I had checked their SPOT tracker to see their location but it hadn’t been updated in days. Looking at their track, it was actually down the day that Jon couldn’t reach us via Sat Phone nor received any of my SPOT checkins earlier that week. Sat comms must have been down in the whole North Atlantic area that day!

When it registered that Gaia was right there across the water in St. Georges Harbor, I immediately jumped up, grabbed my computer, and ran to the dock to help catch lines! We did it!! We had sailed and met up in Bermuda!! Turns out nobody is allowed on the customs dock, but after seeing my excitement that my friends had arrived and I was there to welcome them, the customs agent very kindly allowed me to stay there to help them get docked. 🙂

After helping to secure Gaia up at the dock for the night, I immediately headed back to the

Whitehorse Tavern with them for compulsory celebortory darkNstormies and a good meal. The guys were exhausted so the night didn’t turn into anything too crazy memorable, but we were looking at having weeks on Bermuda to hang out and find some fun.

The next day we all started to discuss the first order of business, our provisions from the passage and what we needed to do to consume and preserve what we had. Between both galley fridges, we were able to plan a few good meals to eat up anything that might be regretfully needing to be tossed and not good to eat after a bit more time. Gaia even had some turkey for a leftover Thanksgiving spread which I was super psyched about as my whole Thanksgiving consisted of Starbucks breakfast and a can of soup.

That day we ran into another great crew on s/v The Blue Peter. We met up with the crew as Kirsten and I sat at the Whitehorse Tavern with our computers catching up on things. Between Kirsten being an exceptional wing lady and Matt being very friendly and chatty with us, the crew finally came over to say hi. Upon meeting Mike, however, he immediately insulted me. I believe the conversation went along the lines of this:   Mike: “Oh you’re heading to the Caribbean? What size of boat are you on?” Me: “it’s 38 feet” Mike: “Oh so, you want to get there SLOW.” This was immediately the point I decided that this good looking yachtie was exactly just that, blah.   He clearly was not impressed with MY little boat. That is not the usual response I get when people find out I single hand my 38’ Freedom. Though, maybe the unusual response should have been a sign.

Matt instigated the rest (I’ve learned that Brits are the best instigators) and being the firecracker I can be, I followed up with Mike at the bar. Instructions from Matt were to go up to the bar and give Mike a good whack (hit him) which turned into instructions to then go give Matt a kiss; yet I got stuck after the whack just chatting up Mike over some darkNstormies (I don’t make a habit of kissing strangers anyway). As it turns out, first impressions are not all they are cracked up to be. Mike is probably the most interesting sailor I’ve met and he always made sure I had a lime in my darkNstormy 🙂

It’s only worth mentioning the following because I almost spit out my darkNstormy…with a lime: Later after my super-full-of-thanks leftovers Thanksgiving meal with Gaia, we all (Gaia, Acedia, and The Blue Peter crew) ended up congregated at Wahoos for drinks that evening. Mike and I were getting on and chatting away together, when Matt looking amazed that Mike and I were actually getting on so well, asked if he was looking for a best man! Thankfully Mike assured him that at this time a best man was not exactly what he was looking for. What is the rush on this island to even speak about marriage to someone you have just met?! I was almost starting to think it was like Groundhog day on Bermuda. The theme and trend to create the shortest faux romance/marriages on the island was uncanny (ah! I just occurred to me, is this a Hollywood thing?). Though it meant that I was indeed not in Boston Harbor anymore. I was out meeting and spending time with great new people in my life; fellow sailors; people creating crazy memories for great stories for me to tell; the exact trill of getting out and doing this trip solo.

The next morning I waved bon voyage to The Blue Peter as they head down to Antigua. Here’s to the fleeting sailor friends you meet in Bermuda, as too many consider the Rock just an expensive truckstop in the middle of the Atlantic. 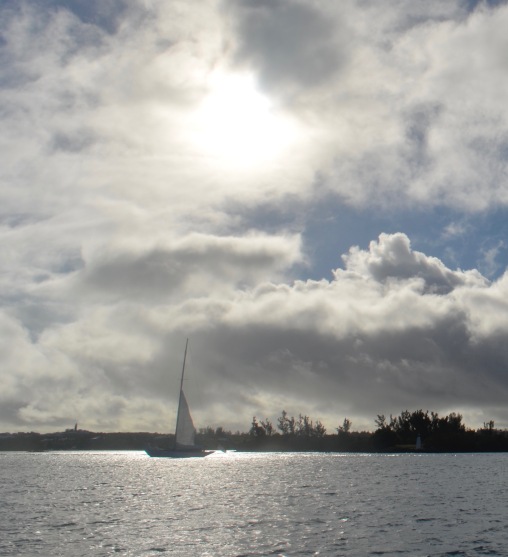